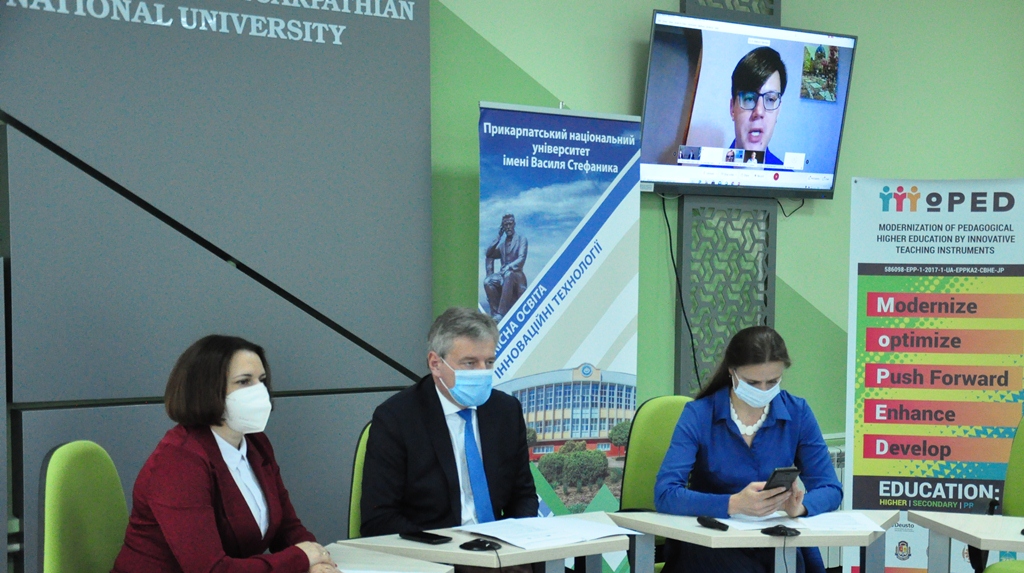 Today the university hosted a presentation of a new project – project SG 53710 “Promotion of sustainable development of Precarpathia through institutional strengthening of the university analytical center.” The project is implemented by the Training and Research Center for Sociological Research of the Precarpathian Region of the Precarpathian National University within the “Initiative for the Development of Analytical Centers” implemented by the International Renaissance Foundation in partnership with the Open Society Initiative for Europe (OSIFE) and with financial support of embassy of Sweden in Ukraine

The event was attended by the Rector of the University, Professor Ihor Tsependa, Vice-Rector for Research Valentyna Yakubiv, author and Project Manager, Director of the Center Olha Maksymovych and members of the Project team, representatives of the media. Professor, Corresponding Member of the Institute of Sociology of the National Academy of Sciences of Ukraine Yevhen Holovakha, Executive Director of the International Foundation “Renaissance” Oleksandr Sushko, Head of the Western Ukrainian Representation of the International Foundation “Renaissance“ Oksana Dashchakivska, Manager of the Program Initiative “Democratic Practice” of the International Foundation “Renaissance “Renaissance” Sofiia Holota, heads and experts of analytical centers of the National University “Kyiv-Mohyla Academy” and the Ukrainian Catholic University, representatives of the Association of Sociologists of Ukraine joined the solemn presentation of the Project online.

The event was opened with a welcoming speech by the Rector of the University Ihor Tsependa. He emphasized that the project “Promotion of sustainable development of Precarpathia through institutional strengthening of the university analytical centre” is another successful grant of the University.

“The university in its missions – education, science – has a third important mission – to influence the development of the region. Therefore, this project is very important for us, because it begins to unite university analysts, experts who have long been working in Precarpathia and beyond, in terms of important estimates, directions, formation of strategies, tactics, concepts. Firstly, this Center will allow them to unite all their efforts. Secondly, to identify those priority areas that are important today both for the University and for the city and for Precarpathia” said the Rector.

He also thanked the International Foundation “Renaissance” for supporting the Project.

Professor, Corresponding Member of the Institute of Sociology of the National Academy of Sciences of Ukraine Yevhen Holovakha addressed the participants of the event with an online greeting. He emphasized the importance of functioning analytical centres in universities.

“It is important that these centers should function on the basis of leading regional universities. In my opinion, this is a guarantee of quality. After all, their activities are based on the work of professional teachers. And I am pleased to indicate that the analytical center of the Precarpathian National University is one of the leaders,” said Yevhen Holovakha.

“It is the universities that are the natural center where the scientific community, the research community, in particular, the one that works in the field of social sciences, should unite. We hope that this example of cooperation with the Precarpathian National University will be effective, because, in fact, today in Ukraine there is a lack of resources for such projects,” said the executive director of the International Foundation “Renaissance” Oleksandr Sushko.

The author and project manager, director of the Center, which won this year’s program for the development of university centers, Associate Professor Olga Maksymovych presented to the participants the concept, main goals and objectives. She emphasized that the Centre’s mission is aimed primarily at promotion of the sustainable development of Ivano-Frankivsk region through appropriate data for educational, youth, economic, social, environmental, tourist, cultural policies, etc. and the formation / promotion of culture / practices of analytically resonable decision making (“Data-Based Decision Making Culture”). Also, Olga Maksymovych said that the Project activities provide for the creation of a strategy for the development of the structural unit of the university, the formation of organizational and procedural prerequisites for development, improvement of the communication component of the unit for organizational development of the University Analytical Center in Precarpathia.

The program of the event also included the first meeting of the Strategic Council of the Center’s partners in order to improve the quality of its work and effective communication of the results of the University structural unit in the target audiences.