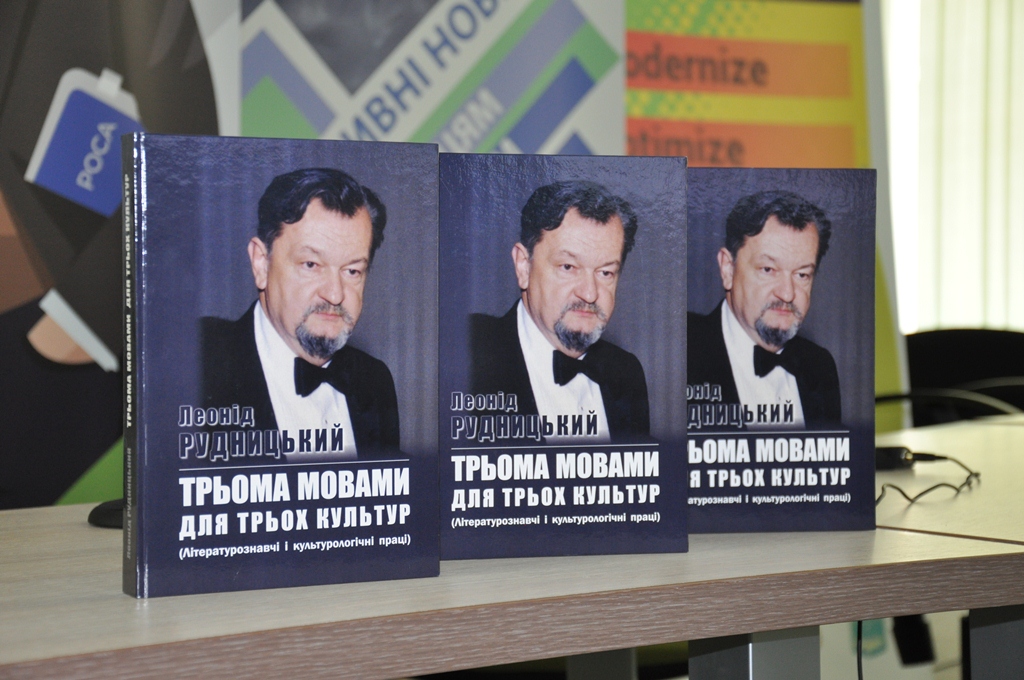 On May 5, the Center for Innovative Educational Technologies ‘PNU EcoSystem’ of Vasyl Stefanyk Precarpathian National University hosted the presentation of the book ‘In Three Languages for Three Cultures (Literary studies and culturological works)’ by a well-known Ukrainian citizen from the USA, Academician of the NAS of Ukraine, professor, Honorary Doctor of the Vasyl Stefanyk Precarpathian National University Leonid Rudnytsky.

The presentation was attended, in particular, by the Rector of the Precarpathian National University Professor Igor Tsependa; Academician, Professor, Honorary Doctor of PNU Leonid Rudnytsky; scientist from the USA professor Irena Ivankovich; Head of the Department of Ukrainian Literature of the Faculty of Philology, Compiler of the Publication, Professor Stepan Khorob; associate professors of the Department of Ukrainian Literature Natalia Vivcharyk, Yevhen Baran and others.

The work was published with the financial support of the University and is timed to the 85th anniversary of Leonid Rudnytskyi. The book by Academician Rudnytsky included his literary and culturological works in Ukrainian, English and German, written by him in different periods, as well as articles about his work. In such a multicultural crossroads, in such diverse spaces, the undeniable creativity of an erudite scientist, a deep and versatile researcher, an ardent supporter of our national independence, an active public figure from the Ukrainian diaspora can be seen.

‘The university systematically implements projects that go beyond it, beyond Precarpathia and, as we see, beyond Ukraine. A vivid example of this is the publication of ‘Three languages ​​for three cultures (Literary and culturological works)’ presented today at the university by a famous Ukrainian literary critic and culturologist from the USA, academician of the NAS of Ukraine, professor, Honorary Doctor of Vasyl Stefanyk Precarpathian National University Leonid Rudnytsky. This is an invaluable work not only in terms of its concept, but also in terms of the figure it reveals – the figure of Professor Rudnytsky,’ said the university rector Ihor Tsependa in his welcoming speech.

Work at the book lasted for several years. ‘In preparation for the anniversary of the respected scientist of the Ukrainian diaspora Leonid Rudnytsky, we aimed to prepare his articles on literary studies, culturology and religious studies. We managed to structure the book into three large sections, written in Ukrainian, English and
German,’ said Stepan Khorob, the editor of the publication. During the presentation, Leonid Rudnytskyi, Honorary Doctor of the Precarpathian University, thanked the university management for assistance in publishing the book and fellow scientists for their work on the preparation of the publication.

Each of the three chapters of the book has a corresponding title, given in the language in which the scientific works written and proposed by the author are written. A separate section consists of literary-critical works on the scientific work of Leonid Rudnytsky. Here are reviews of his books and articles about him that have appeared in recent years in Ukraine and around the world. Natalya Vivcharyk, associate professor of the Precarpathian University, literary editor, noted during the presentation that the book ‘Three languages for three cultures’ is extremely valuable because it captures the attention on Ukrainian studies in the English-speaking and German-speaking world. At the same time, Academician Leonid Rudnytsky demonstrates to us how important it is to maintain this self-identity in a multicultural environment.