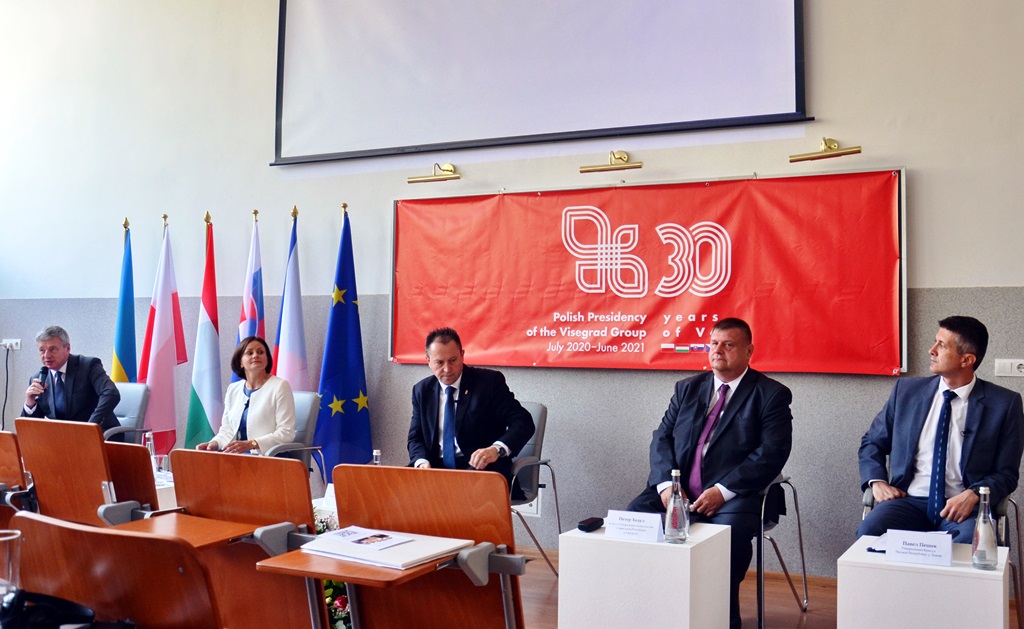 A conference and exhibition dedicated to the 30th anniversary of the Visegrad Four, with the participation of Consuls General and Consuls of  V4 Member States, was held on the 23rd of June, 2021 at the Precarpathian University.

Poland’s presidency of the Visegrad Group, which unites four Central European countries: the Czech Republic, Slovakia, Hungary and Poland, ends in June. It also coincides with the anniversary date, as this year marks 30 years since the adoption of the Visegrad Declaration.

These events were a good opportunity for the Consulate General of the Republic of Poland in Lviv in cooperation with Vasyl Stefanyk Precarpathian National University to organize an event attended by Consuls General and Consuls of  V4 Member States: Czech Republic, Slovakia, Hungary and Poland in Lviv and Uzhhorod; representatives of local authorities and universities of  Ivano-Frankivsk, Ukrainian beneficiaries of projects funded by the Visegrad Fund; representatives of the Poland-Belarus-Ukraine cross-border cooperation program, the diplomatic corps and the media.

“The University has been developing cooperation with the universities of the Visegrad Four for years, and today’s meeting of Consuls General and Consuls of V4 member states at our university is not accidental. A few years ago, a unique institution of universities in the Carpathian region was created – the “Collegium Carpathicum”, which included the universities of the Visegrad Four, Ukraine and Romania. It is symbolic that the headquarters of this university organization is located in the Observatory on Mount Pip Ivan. In fact, we provide the block of cultural scientific diplomacy that is important today and directly for the Visegrad Four, and the integration processes that are taking place in Ukraine with the European Union, “said the rector of  Vasyl Stefanyk Precarpathian National University Igor Tsependa, opening the conference.

“Our official program will be announced during Hungary’s official presidency. The main areas are economic recovery after the pandemic, security issues, the next 30 years of the Visegrad Group, as well as the Visegrad Four Plus program,”said Jozef  Bugaila, Consul General of Hungary in Uzhhorod.

There was also a discussion panel on partnership. It was moderated by Svitlana Kropelnytska, Director of the Agents of Change Project and Education Center at the  University, Associate Professor of the Department of  Finance. During the discussion panel, presentations of cross-border projects implemented at the expense of the Visegrad Fund and the EU took place. Panelists exchanged new ideas and areas of cooperation.

After the conference, the Consul General of the Republic of Poland in Lviv Eliza Dzwonkiewicz solemnly opened the exhibition “30 years of  Visegrad cooperation 1991-2021.” According to the organizers, today’s event was a good opportunity to present the results of the Visegrad Group and discuss its significance for the Central European region and for Ukraine in particular, as one of the most important countries of the EU Eastern Partnership.