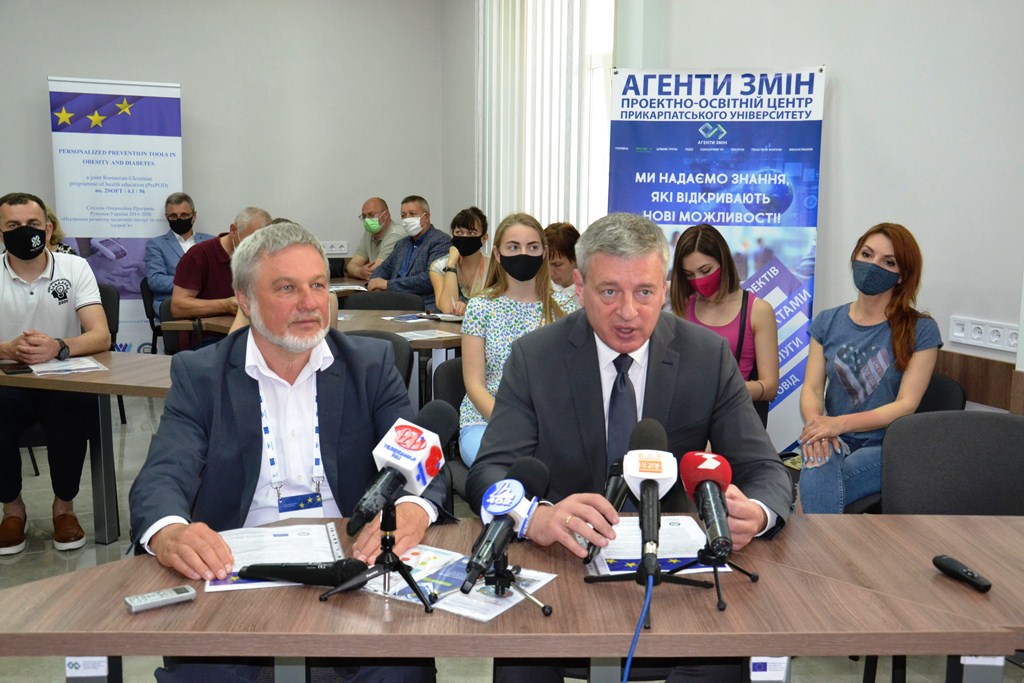 A press conference on the interim results of the cross-border project “Personalized Approaches to Prevention of Obesity and Diabetes (PrePOD)” has been held today at the Project-Educational Center “AGENTS OF CHANGE” of the Precarpathian National University. Project participants of the Precarpathian University, representatives of the PNU  administration, members of the local government, and the media have participated in this event. Also, everyone had an opportunity to join the press conference online.

“Our biochemists of both universities are developing screening methods, consulting family doctors what to pay attention to in order to prevent these diseases of the XXI century. Therefore, all methods will be used so that this pilot project could be improved and disseminated both in Ukraine and in Romania,” said PNU Rector Ihor Tsependa at the beginning of the press conference.

This is an international, Ukrainian-Romanian project in the field of contemporary biomedicine – “Personalized approaches to prevent obesity and diabetes – a joint Romanian-Ukrainian program to obtain and disseminate health knowledge (PrePOD)”, funded by the European Union and co-financed by the Precarpathian University. A total of 130,000 euros has been allocated for its implementation. The main issue is how to influence the development of obesity and diabetes in a non-drug way in order to reduce the risks of developing these diseases,” said Volodymyr Lushchak, PNU professor and project manager from the Ukrainian side.

According to the scientist, the problem of obesity, overweight and diabetes is one of the main problems of human health and is relevant today around the world. As part of its implementation, Volodymyr Lushchak said, there is a tendency to increase the incidence of such pathologies in children.

“Our Romanian colleagues and we agreed on the fact that there had been almost no such cases among children before. And now it’s a problem. What causes this problem? Firstly, that’s food, in particular, fast food. Excess sugars, carbohydrates, fats lead to such problems in the human body. Secondly, the fundamentally important issue is a sedentary lifestyle. Many children don’t move much, especially due to constant sitting at the computer, working with gadgets, and using mostly sedentary games. If we look at the health issue more broadly, it should be noted that overweight, obesity, and diabetes are the problems that lead to accelerated aging of the human body,” – project manager Volodymyr Lushchak shared the results of the research.

During the press conference project researchers Alexander Abrat, Associate Professor of Biochemistry and Biotechnology, Faculty of Natural Sciences PNU, and Ivan Tverdokhlib, IFNMU intern, demonstrated the use of modern devices to determine morpho-functional parameters of the body and their use to calculate the risk of developing diabetes mellitus.

During the press conference, the project participants noted that in September this year it is planned to identify adults and children with pre-diabetes and/or undiagnosed diabetes/overweight/obesity in the localities of Ivano-Frankivsk region (Burshtyn, Piylo, Tysha, and Stetseva) by screening with the help of the mobile clinic “Health on Wheels”.

“The project has already purchased a vehicle, equipment, and devices that will allow to conduct medical check-ups of the residents (adults and children) of the territorial communities of the region. Also, the project specialists have already trained staff and students to measure the health status of people and collect information during the screening of target groups” said the project manager Volodymyr Lushchak.

The professor noted that the teams of Ukrainian and Romanian scientists work in a complementary way. This cooperation will provide an understanding of the current situation regarding obesity and type 2 diabetes in the Ukraine-Romania cross-border region in the future. It will help project scientists make informed decisions concerning the reduction of the disease incidence in these localities and also to provide advice to doctors and the general public.

It should be noted that the grant 2SOFT / 4.1 /56 is implemented under the Joint Operational Program Romania-Ukraine 2014-2020 “Support of the development of medical services and access to health”. It is funded by the European Union. The beneficiaries of the project are Stefan cel Mare University (Suceava, Romania) and Vasyl Stefanyk Precarpathian National University (Ivano-Frankivsk, Ukraine). The main goal of this project is to raise public awareness of the risk factors associated with overweight, obesity, and diabetes, also screening of adults and children, their personalized counseling. The term of its implementation is 22 months. The budget is EUR 329,200 (90% is the contribution of the Romania-Ukraine Joint Operational Program 2014-2020 and 10% is the contribution of both beneficiaries).